On a miserable day that saw most of the field crash out or be removed from the race Brendan Cowley thrived in these typical PNW conditions. The race from his perspective:

“Ballard was a wet and slippery crit this year. It was raining off and on all day and for a while looked like it was going to be dry for the men’s race. Thirty minutes before start the heavens opened and the brick work on the roads because an ice rink. I knew it was going to be hairy so I got myself a good starting position. When the race started I made sure I was in the top five. That meant I had to follow attacks but it was worth burning my matches early to stay upright. Two laps in and the first major crash happened. It split the group and eleven riders broke away. I made the split and that was it. The rest of the field was pulled from the race and we were left with twelve riders. Nothing noteworthy happened for the next bit so I’ll skip to one lap to go when a crash took out eight riders on the third to last corner. I dodged the crash and sprinted for third getting beat at the line by a few inches.” 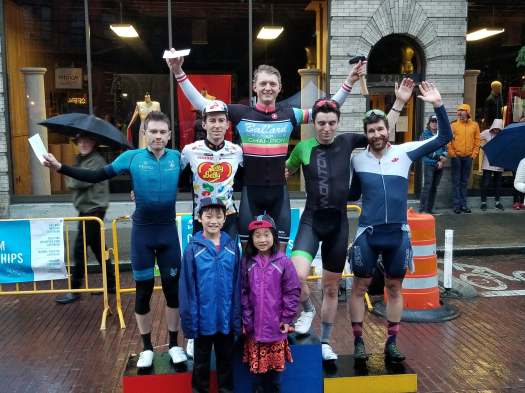